Rawr! for a Reason History 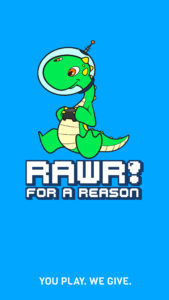 I’m strictly following lean startup and agile development principles with Rawr! for a Reason. I decided to move forward with the naming, branding and website of the company before making our first game. I believe this will be an easier and lower risk way to test the Rawr! for a Reason business idea of giving 50% of our net profits to charity compared to spending the time and resources testing a game.

After developing the brand, I will I set my final branding up against a lineup of my competition to see if people choose my brand over others. Second, I counted the people who voluntarily signed up for game updates after taking the logo surveys. I figure these two metrics will help me understand if 1) I’ve chosen a good branding strategy and 2) There is potential to continue this project.

Because I am an atrocious artist, I started searching for someone else to help. I decided to source from within the Reddit community since Reddit will be a crucial part of this game’s success. I posted in both r/forhire and r/gamedevclassifieds, receiving close to 100 submissions. I chose Devon from YourToyRobot because he had the most experience illustrating characters.

I had a lot of success using agile management techniques on this project. I think our success came down to two things. First, I spoke w/ Devon about releasing really rough concepts early so we were sure we were always on the same page. Second, I built a way to test the logos through friends and r/sample size before I started the project. It is easy to get off track and develop something the customer doesn’t want. We went through maybe 10 rounds of revisions until we created a logo that our customers chose over the logos of leading mobile game companies.

I’d consider both of my goals accomplished. The majority of people I surveyed chose Rawr! for a Reason over other leading splash screens. I was honestly a little bit shocked by the amount of people who gave me their e-mail address. I got multiple comments saying they thought what I was doing is “cool” and they “loved the idea.” Hopefully this translates into real world demand.

I’d like to thank the redditors of r/samplesize for taking the time to fill out my surveys. I appreciate all the feedback. You really helped create something better than I could have created without you. I’d highly recommend Devon from YourToyRobot as well. As you can see, he does stellar work and is easy to work with and very affordable.

I’ve been spending an hour a day starting the mobile game studio and finally decided it was time to give it a name. I wanted a name that was fun and viral, and really embodied what my company stands for—we give 50% of all our net profit to charity and strive to bring light to important causes. After brainstorming several names, I decided it was only right to have the winner chosen by my future gamers—the reddit community! After several rounds of surveys and interviews, the winner is “Rawr! for a Reason.” I’m a big fan of the name, and my interviews with the community have shown promise of it resonating with my target audience of reddditors, mobile game content creators, and other mobile game media.

I’d like to thank r/samplesize and all who have donated their time for helping pick such a wonderful name.

I’m posting my process here for those interested. It took 3 surveys to reach the final name. Some of the notes below have realizations from the in-person interviews I did during that time as well.

I’m a firm believer that it’s the execution of the project that creates success — not the name. However, through talking with customers I’ve learned that the mobile game studio’s name will be paramount in creating a brand that coveys my value proposition strongly and quickly. The average mobile game user does not hesitate to delete games that they deem a waste of space often after only a single play. I’m hoping that giving my company the name Rawr! for a Reason, along with strong and meaningful branding, will pique their interests enough to give our games a chance and prove that we are a brand worth supporting.

What is Rawr! for a Reason?

Rawr! for a Reason is our line of awesome mobile games that provide awareness and support for the causes that make the world a better place. Our goal is to create a sustainable indie mobile game development company that donates 50% of its net profit generated from optional in-app ads to charity.

Where It All Began

In the beginning, Rawr! for a Reason didn’t start out as Rawr! for a Reason. In 2015, I read (link to the article) that the viral game Crossy Roads made $10M from optional in-game ads and thought “I could do that!” At this point in time, I had no ambitions to donate 50% of my profit to charity—I was just interested in using creative techniques to “hack” my way to profit.

For the next few months I went to work creating the next Crossy Road. My original plan relied on two hypotheses that I thought might lead to success:

I tested the first hypothesis by talking to dozens of mobile gamers to learn where they downloaded mobile games. Almost everybody either downloaded them from browsing the top charts or a friend’s recommendation (an answer I was not expecting.) A few “hardcore gamers” downloaded games off recommendations from YouTubers, review websites, etc. Hypothesis 1: Confirmed.

For the second hypothesis, I bought a dummy Unity game off ChupaMobile and published it to the app stores to test the number of downloads I could get. I conducted 45 experiments on every community I could think of ranging from small Facebook Groups I managed to wrangle my way into, forums of every nature, Reddit, Craigslist, etc. I averaged 4-5 downloads per post (much lower than the 20+ I was expecting.) Hypothesis 2: Failed. I couldn’t crack the top charts solely by “hacking” downloads.

Back to the Drawing Board

After the second hypothesis failed, I put my game project on the back burner. Busy season was ramping up at Wrestlingmart, where I was pouring all my focus into implementing NetSuite. I was still writing in my journal about my game project from time to time, and began to have a shift in perspective. What if I moved my focus from the idea of marketing to draw lots and lots of little downloads all over the place and instead I focused on creating the viral-ness from within the game? How could I make my app so that people would be inclined to share it, blog about it, and talk about with their friends? I’d have kittens, make fun of Kanye’s antics and the Kardashian lifestyle, and feature some of Trump’s most ridiculous one-liners.

I kicked the project back into a high gear. I continued to brainstorm ways to make apps viral and started to talk to indie app developers, YouTubers who review mobile games, and gamers themselves to better understand the mobile game market. I noticed several issues that plague the mobile game market from these various perspectives:

How Rawr! for a Reason Came in to Play

I started bouncing ideas around on how to overcome these issues. During that time, I was working on my own personal goals and thinking through the impact I want to have on the world. The idea of “games for good” formed in my mind, eventually leading to Rawr! for a Reason. It allowed me to avoid all of the issues I saw with the current mobile development market AND do something positive for others. More importantly, Rawr! for a Reason was already 10x as engaging of a project as the previous model. I got excited just thinking about it.

I developed a set of new hypotheses:

I started talking to potential customers, bloggers and vloggers about the idea and got pretty much a universal confirmation of my theories…. but I felt that there might be an intense dichotomy between what a user says and what their actions will be. If I walk up to somebody on the street and ask if they would support a company that supports charity, their response would be “Yes!” as long as they believe in what the charity stands for. However, their actions might differ once effort is required. I needed to know: would the supportive gamers I talked to and their peers really be influenced by Rawr! for a Reason’s mission when making real life decisions of whether to review the game, watch ads on the game, share the game, etc.?

To find out, I created a working prototype called Polar Melt. It brought awareness to global warming by featuring polar bears jumping from iceberg to iceberg and providing global warming facts at the end of each game. I got a semi-positive response form this game… but it was too rough of a prototype and not novel enough or fun enough of a game to succeed.

My goal these next few months is to create a polished game that requires a minimum amount of effort to validate if my thinking is correct. To do that I think I will need a game that is:

This is the abridged version of where I am today. I plan to share a lot more of the things that I’ve learned in the process including:

Edit: I changed CharityGames (a placeholder title) to Rawr! for a Reason